Why should everyone feed their ferret "soup?"

For the purpose of this blog, the term Dook Soup will be used as a catch all term for Duck Soup, Gravy, Dook Soup, Soupies and other similar foods. We chose to use the term "Dook Soup" because we find the term cute, and less confusing to new ferret owners.

I have been asked quite a few times in the last few days WHY I encourage people to learn to make dook soup and introduce the snack to their ferrets. Most people point out that introducing new foods to mature ferrets can be difficult, and that the foods they feed are sufficient in proteins and nutrients - so, they ask, why is it necessary to go through the trouble of making and then introducing dook soup?

First off let's look into what a proper dook soup is: a good, home made dook soup is essentially a high protein, vitamin rich "shake" for your pet. If properly made, it is nutritious, high in protein, low in sodium, low in carbohydrates, free of harmful sweeteners and well balanced. It can be tailored to meet your ferret's specific needs, can easily be syringe or spoon fed to a sick ferret and can be used to sneak certain medications in to your ferret's food... so if your ferret is healthy, why feed it? 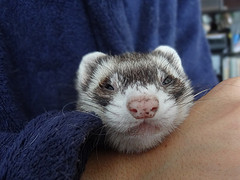 Well, the unfortunate but true answer is this: just because your ferret is healthy today does not necessarily mean that he or she will be healthy tomorrow. Accidents happen, sicknesses creep in, diseases strike - and now you have a less than health ferret no longer able to eat their normal food...  what do you do? Mix a high protein meal replacement for your ferret --- that's right - dook soup! So now you have a ferret with compromised health; the animal is likely already stressed and not feeling well... does this sound like the best time to be trying to introduce a new food to your fuzzy friend? Imagine if, as a child, your parents tried to feed you some strange food you'd never seen before when you had a really bad case of the flu... imagine how that would have made you feel, and how willing you would have been to try it. So why would you do this to your fuzzy?

If you take the time well before your ferret is sick to mix dook soup on a semi-regular basis, and introduce it properly to your ferret, he or she will become accustom to dook soup and most likely view it as an exciting treat... and everybody knows that it is much easier to feed a sick ferret a treat than a strange and unfamiliar food! This previous introduction can not only make recovery from sickness or injury much easier on the animal (recovery is sped up by proper nutrition and appropriate weight gain; two things which are provided by dook soup), in some situations it can actually mean the difference between life and death for the animal. 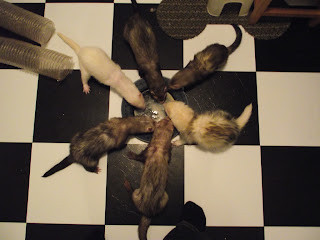 Here is an example of dook soup making the difference between life and death for a ferret. We had one of our ferrets sneak out under our dog over the summer. The little girl had insulinoma and required daily medication. Despite our best efforts we could not find her. We canvassed the neighbourhood, searched yards, put up posters and, just when we feared the worst, she wandered back into our yard after well over 24 hours - hungry and too exhausted to eat on her own. We offered our little ferret some dook soup in a syringe and, because she was familiar with the food, she took it willingly. Had we not taken the time to introduce dook soup in the past, and had the little ferret not viewed dook soup as a treat, it is most likely that this extremely picky little girl would have perished. Instead, with feedings every two hours, she regained her strength and within two days, she was back to her old self - biting toes and even attempting to sneak out under the dog again!

So please, for your fuzzy's future, take the time to make and introduce dook soup. There are many recipes available, including this one and introducing dook soup takes a bit of time but is relatively simple. Here are some tips: water down the soup at first. It is a bit strong, especially for ferrets that are not used to meaty smells and flavours, so add warm water, some cream (if your ferret enjoys cream), and quite a bit of oil (such as ferretone, salmon oil or whatever similar oil your ferret enjoys most; if your ferret is not familiar with oil, consider introducing that as well - it makes nail clipping a breeze!). Make sure the soup is warm (not hot) and offer it to your fuzzy. When the ferret turns its nose up at the soup (which will most likely happen) rub some on their paws, lips, and (if you can), teeth - you want the ferret to taste it. Expect the ferret to say "yuck! Ferrets don't eat that" the first time. Put the soup in the fridge, reheat later and repeat. Eventually (in some cases that day, in others this may go on for a week or two) your ferret will be more willing to lick the soup off your finger and you can offer them the small bowl or plate. Gradually decrease the amount of extra oil and water (and cream if your ferret likes cream) that you add as the ferret becomes accustom to the taste. Remember to take baby steps here - don't rush it, your ferret will develop a taste for dook soup eventually! 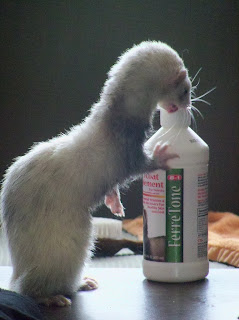