Even though our main goal at Ferrets North Information & Rescue Society is to help ferrets and ferret owners in Northern BC, we do, on occasion, assist with the rescue of ferrets elsewhere. This can be in the form of alerting the appropriate rescue to the situation of a specific ferret, bringing a classified ad in their area to their attention, or even, in extreme cases, raising the money to get a ferret in another part of the province out of harm's way.

Recently, a classified ad was brought to our attention and, because the ad was in the lower mainland, we brought it to the attention of someone in the lower mainland who is looking at starting up another rescue in that area to help deal with the overwhelming numbers of ferrets in need of assistance and rehoming.

The ad was for a pair of free ferrets. It stated that the ferrets were approximately 5-years-old and in need of a new home, as it was believed that the female ferret was developing adrenal disease, but was otherwise healthy. The ad did not mention any health concerns with the other ferret.

After contacting the people numerous times, the rescuer was finally contacted back and arrangements were made for her to pick up the ferrets.

She was expecting to find a pair of 4-5 year old ferrets - one healthy and one with mild adrenal disease which would need treatment as the disease progressed but was otherwise healthy.

Here is, in her words, what she found 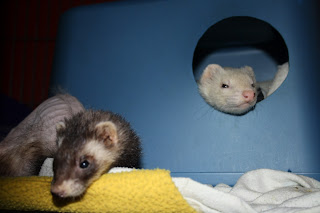 "Zoe and Frank are the sweetest ferrets ...so gentle and cuddly. It is so sad that they have had 4 homes in their 7 years of life [vet records from their first home indicated their true age]. The cage that [the former owners] said was theirs was clearly the rabbits cage, the bedding stunk of mold and not been washed in forever. It was a sad state. 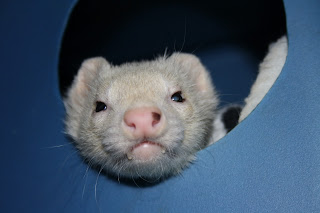 "The poor boy has cataracts in his eyes; he is pretty much blind. He cannot walk, his hind legs are just being dragged. They are both so skinny skinny and ate like they had not seen food in weeks.
The girl has no hair from the shoulder blades down and hind end weakness, her vulva is swollen and bloody.
They have both been started on prednisone and have had been given Lupron shots. 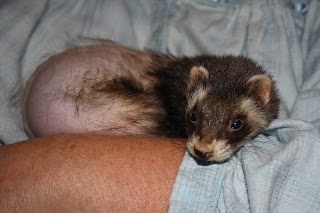 "The mites have been cleaned out of their ears and the fleas picked from their bodies, they have clean bedding , beds and hammocks. They were being rehomed because the dad did not want the vet bill.
I lost it. I asked them why I should [be responsible for] for the vet bill and was told that because I was a rescue, it was up to me to make them healthy because they [the owners] did not care if they made them [their pets] healthy or not. These two have not been loved in a while, and they deserve to be loved and cherished for their last days here on this planet."

Now, it is not often that people are prepared to take in such sick animals at the drop of a hat, and these two beautiful ferrets have more than their share of health problems. As such, their rescuer  could use some assistance in giving these two the best days of their lives. Anyone that is interested in helping can contact her at  ferretsfolly@gmail.com and find out how they can help. One of our volunteers has offered to supply the rescuer with a couple of melatonin implants for the pair, but more help is needed. If you are willing or able to help wit their ever increasing vet bills or in other ways please let her know - any assistance is appreciated.
Posted by ferrets in the north at 8:22 AM