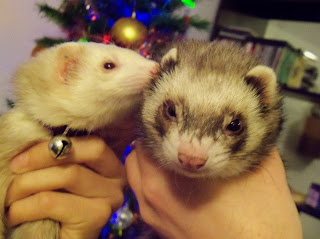 2) Know your ferret. Know their pet peeves, favourite treats, favourite toys and anything that they are protective or afraid of. Knowing these things will help you tune your introduction to suit your ferret best. Example: I have a VERY feisty female ferret. She does not easily accept new comers, she loves ferretone as a treat and is extremely protective over a handful or toys, as well as 'her' pink cage - this is not the cage that she is housed in, however she is extremely protective of it, and that if the new ferret is extremely timid and refuses to fight back, she will continue to go after it and may never accept it. Knowing this has helped me introduce more than one ferret to her.

3) If possible, learn as much about the ferret that you are introducing as possible. Have they been around other ferrets before? If so, how did they react? What are their favourite treats? Are there any triggers that you should be aware of? This will help you ease the stress of the introduction on the other ferret. If, for example, the new ferret has never been around or seen another ferret (well, at least not for a few years), then it might be an idea to let the two ferrets sniff through the cage so that the new ferret doesn't become overwhelmed by the other ferret - your new ferret may not be aware that it is a ferret. 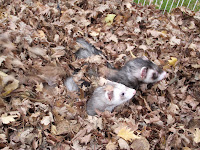 4) Do your first intro in a neutral location - this may be a part of the house that your ferrets are not allowed in, your front yard or even a friend's house, this way neither ferret has a 'home ice' advantage. Watch for 'warning' signs such as one of the ferrets going for the front of the throat or relentlessly stalking and beating up the other ferret. If blood is seen, separate them immediately and be aware that this is likely a sign that the two ferrets will never get along. 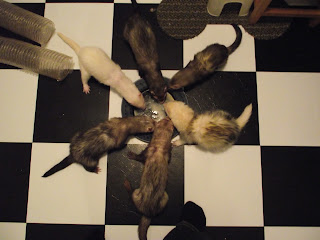 5) Treats are your best friend. A plate of ferretone or another well loved treat can be helpful for new ferrets to bond over - they will be more pre-occupied with the treat than with each other
* if either ferret ignores the treat (and it is a treat that it normally LOVES) and goes after the other ferret, take note - this could be a sign of either a long introduction or a possible rejection

6) To encourage licking and friendly interactions, I sometimes coat my ferrets in ferretone (ok, coat might be an overstatement; I put a couple of specs of ferretone on the necks of the new and existing ferrets) - this can encourage the ferrets to lick and 'groom' each other rather than fight or scruff.

7) Switch your ferret's blankets with that of the new comer's so that they can get used to each others scent. 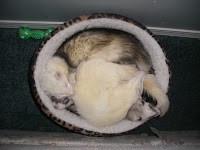 9) Clean your ferret's cage or room thoroughly before allowing the new ferret to spend time in the cage. This makes the cage a slightly more neutral ground.

10) Adventures can help with introductions. If the ferrets are getting along a bit, but still squabbling on occasion, taking them out for an adventure - a trip to the park in which they share their kennel on the way home, a trip to a pet store to pick out some new toys or treats, a walk in which they share the same space when they get tired - may help the two bond and decrease the squabbling. If the introduction is a particularly challenging one, then don't place the ferrets together at the end of the adventure; rather place them in the other ferret's carrier so that they begin to associate giant, fun outings with the new ferret.

11) Be prepared to separate ferrets. Scruffing is normal, but if either ferret gets so frightened that it soils itself, separate immediately, reassure and calm both ferrets and try again later. It is important to not interevene too soon as this can sometimes prolong the squabbling. This is really tough for most ferret owners, however, know that once the ferrets figure out who is in charge, they will get along just fine. If either ferret attacks the other ferret's throat (not back of the neck - biting the back of the neck is perfectly normal and not at all alarming behaviour), then supervise extremely closely and separate immediately if you see blood - this can mean that the ferrets do not like each other and will not get along. Face biting is another action of note; this can mean that the ferrets do not like each other and though not as alarming as blood shed or  throat biting, it should tell you that you may need to take the introduction a litter more gradually.

13) Communal bath and grooming sessions can help encourage bonding among ferrets, after all, nothing helps create fast friends quite like a common 'enemy' - you, the one doing the cleaning!

14) Don't rush it, and don't get discouraged too easily. Some introductions are quick and others are long... I have had successful introductions take as little as 15 minutes and as long as 3 months. So long as the existing ferrets are not attempting to kill the new comer and do not 'hunt' the new ferret (attempt to force themselves into the cage of the new ferret while giggling a little bit maniacally), then it is likely that the introduction will succeed. Watch for warning signs of aggression - hunting (as mentioned above) or stalking behaviour (seeking out the where about of the other ferret immediately with nothing distracting it), fixating (the ferret wants to get at the new ferret, regardless of what treats or obstacles you place in the way - again, he or she will NOT be distracted), blood, aggression/ attacking/ lunging at the other ferret and attempting to injure it even in new or neutral territory. If you do not notice any of these signs, then just take it slowly - don't stress either animal out too much and try to keep their interactions positive. It may take more than a week for the new ferret to be accepted, it may take only hours or days... but it could also take several weeks or even a few months.

15) Its true, not all ferrets will get along - you may find that one simply will not accept a new comer, or be accepted by an existing group. Be prepared for the possibility of having to either re-home the new comer or have separate ferret playtimes forever. 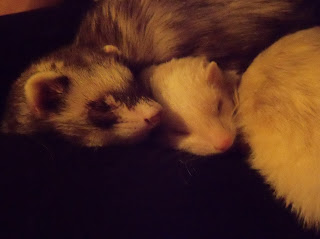 Good luck!
Posted by ferrets in the north at 3:45 PM