When operating a rescue, you notice certain things... one of the most glaring is that many people are obsessed with having a baby ferret. Many people believe that adopting an older animal is a disadvantage; that it will interfere with their ability to have the animal bond with them, or to train the animal in a certain way. While adopting a geriatric animal can be difficult for first time owners who may not be as good at spotting health problems, I would advise first time pet owners to consider an adult rather than a baby animal, and ideally one from a rescue that can tell you a bit about the animal and its personality.

The reasons for this are pretty simple: 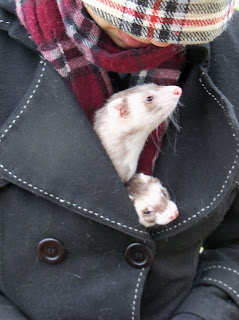 1) The tough stuff is often done. Generally, an adult ferret is already nip trained. The animal may already know some tricks, and the odds of the ferret ingesting a portion of a toy and getting an intestinal blockage from eating something strange has been reduced (the threat is still there, however baby ferrets are far more likely to destroy and then eat a piece of a toy or a random object that an adult ferret would ignore). Litter training may also be included in this package (well, as much as that particular ferret can be litter trained), but if not it can be more easily taught. Adopting an adult ferret is a bit like adopting a pre-trained, well behaved adult dog rather than adopting a baby dinosaur and attempting to turn it into a dog... I know that that sounds a bit far fetched, but the reality of the situation is that many first time ferret owners have never even met a ferret before adopting their first animal and have absolutely no idea how to turn an unruly kit into a well behaved and well balanced adult... its not impossible, but it is a huge and sometimes overwhelming task.

2) Training is easier. This may sound counter-intuitive to some people, but in reality, it is much easier to train an adult than a baby. Adults have longer attention spans and better memory retention than babies. Training requires less repetition and though, in the case of adult animals, it may involve some re-training to break bad habits, it is generally rather simple. The old adage "you can't teach an old dog new tricks" is not only misleading, it is downright false - it is much easier to teach an old dog (or ferret) a new trick then it is to teach a puppy (or kit) ANY trick.

3) They WILL bond. Having a ferret as a kit does not ensure that the animal will bond with you any more than an adult ferret will. I have had both kits and adult ferrets and have found that the bond between the person and the animal depends more on how you treat and interact with the animal than how old it was when you got it. Some ferrets will bond quickly with their owners and start to trust them almost immediately, others are more suspicious and take longer. This is true whether or not the animal has 'baggage' from a previous home. 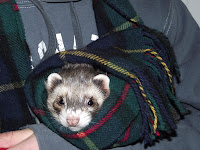 Example: we got 2 ferrets from the same home at the same age. The home was a good one; neither animal had ever been mistreated or mishandled in any way. One of the two ferrets started to trust us and bond with us in less than a month, the other took several months before she would even take food from our hands - she did bond with us eventually, but it was a long, slow process.

Example 2: Male ferret rescued from an extremely abusive situation. He as 4-6 years old, possibly older, and had known nothing but abuse at the hands of his former owner. Despite this, he bonded with me in less than a month, and within 2 months he would follow me around and rest his head on my foot when he felt uncertain or wanted my approval.

Example 3: Baby ferret, 4-6 months of age when he moved in. He is a sweet ferret and was not mishandled in his first home. He is as friendly as can be and loves everybody... but that's just it - he doesn't care whether or not you are his owner or a stranger in the house. He thinks that everybody is great, but he is our least bonded ferret. He will run to be rescued if he feels that another ferret is picking on him, and beg for treats, but he will do this with all people. So far as I can tell, if we were replaced tomorrow by a new family, he would not be phased in the least. If you buy into the "babies bond more" then this ferret should be more affectionate and attached to us than any of the ferrets in the previous examples, but this is not the case. 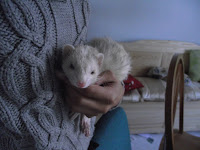 4) Getting a ferret as a baby will not make them cuddle. Some ferrets are more cuddly than others, regardless of when you get them.This depends on the animal's personality rather than their age. I have two ferrets nearly the same age. I got them both at a young age - one 3 months, one 4-6 months. The one that I got at 4-6 months old is and always has been a much cuddlier ferret than the one that I got at an earlier age, but neither is as cuddly as the male that I got at 5 years of age, or the 3 year old male that we fostered for a brief period.

5) If you are adopting from a rescue, the rescue volunteers are often very knowledgeable about that particular animal and more than willing to offer post-adoption support. This can be invaluable if you are concerned that the animal is ill, or if you have any questions regarding the animal's behaviour. Most shelters are more than willing to take the animal back if things don't work out and though you may not get a refund, you can feel confident knowing that the animal will not be euthanized or sold to an inappropriate home. 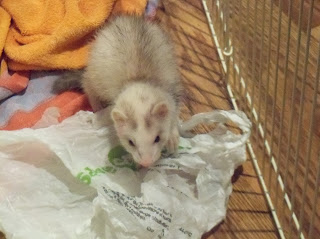 In short: yes, babies are cute and fuzzy, but for first time owners, adults are often a better option and no, getting an adult will not rob you of any ferret affection.
Posted by ferrets in the north at 8:26 AM