At our ferret rescue, when asked why an interested person is interested in a ferret as a pet we often hear "because I want a cuddly pet"... in reality, if you want a cuddly pet, perhaps you should consider a lap dog or perhaps a Persian cat... ferrets are not generally cuddly pets. This is not to say that no ferret is cuddly - some will curl up on your lap and snooze while you watch a movie, but to assume that all ferrets will do this is a mistake. The reason, I suspect, that many people have the idea that ferrets are cuddly is due to the large number of sleeping ferret pictures found on the internet. 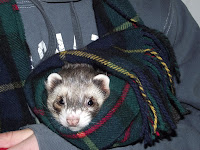 What non-ferret owners do not realize is that these pictures are so prevalent not because all ferrets are super cuddly, but because this is the only time that many ferret owners can get non-blurry pictures of their extremely active pets! 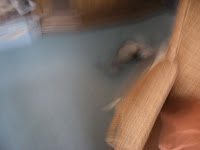 Having said this, there are some things that you can do to encourage your pet to cuddle...

1) do not try to cuddle them when they are hyper and just out of the cage. Take them on an adventure, play with them and let them run around the house first - in other words, give them time to burn their energy and calm down. Once they are calm and ready for a nap, you can pick them up, pet them and see if they are ready to snooze on you.

2) Treat them when you handle them so that they associate being picked up and held with 'good' rather than restrictive. When they are hyper, keep holding periods "short and sweet"; once they are calm, you can try holding them longer. They will likely enjoy being handled and treated more at this time and may even enjoy a good scritch.

3) Consider adopting an older ferret. Older ferrets are more likely to be cuddly, and the older the ferret, the more cuddly they are. 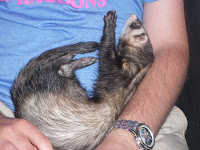 4) Take the time to develop a trusting relationship and a bond. The more the ferret is bonded with you, the more likely it is that he or she will cuddle with you. This can take time, especially if you are not the ferret's first owner.

5) Don't try to force it - not all ferrets like to cuddle. Some will display affection in different ways such as wanting you to play with them, but they are too hyper to settle down and let you cuddle them. Trying to force the ferret to cuddle will put strain on your bond, stress both you and the ferret out and decrease the odds of the ferret wanting to cuddle you when he or she is older and calmer. 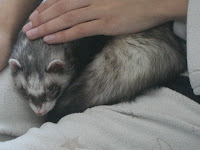 Posted by ferrets in the north at 1:37 PM