I've noticed while perusing the "ferret in need of home" ads (of which there are many in BC, predominantly in the lower mainland) that people that are selling their ferrets post that they will really miss the animal, but have to part with it. While it is true that people do, sadly, have to part with their beloved pets due to unfortunately situation changes, you can often tell whether the person is what I will call a 'legitimate' ferret owner, or someone who got a ferret without researching the animal, cared little about it and is now sick of it. A tell tale sign: the animal is being advertised with all of its supplies: cage, harness, hammock AND EXERCISE BALL.

This is an extra large exercise ball intended for chinchillas, rats and ferrets.

Now, it certainly doesn't take a genius to figure this one out, but take a look at the shape of said ball (and even at extra large, they are not very big)... now for those that are not familiar with ferrets, here is a picture of a ferret: 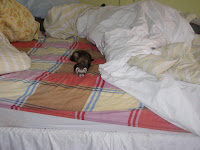 Ferrets are most definitely more cylindrical in shape than they are circular... again, this is a simple point but one that some seem to miss: due to their shape, ferrets do not fit very comfortably into round exercise balls.

I remember reading not too long ago an ad which advertised a female ferret for sale. The person that posted the ad said that they were re-homing the ferret because it got into too much trouble, and that they would include the exercise ball which they purchased for their ferret to keep it out of trouble. They go on to say that the ferret hated the exercise ball, which is why they were now re-homing it. Really? The ferret HATED the ball? THAT was not predictable.

I am, of course, not meaning to imply that ferret exercise balls are useless wastes of money - they have plenty of fine uses. You ferret can stick their heads in them and push them around (from the outside) until they get bored, the ball can double as a treat holder or round toy bin, you can tape up the holes and use it as a change jar... the possibilities are endless so long as you are not planning to use the ball as a "safe way to let your pet explore his or her surroundings". If you are concerned about your ferret's safety, nothing replaces thorough ferret proofing and good supervision; placing them in an uncomfortable, poorly ventilated piece of plastic is not the answer.
Posted by ferrets in the north at 4:53 PM