Ever wonder what colour your ferret is? (In terms of official classification anyways). Just as dogs and cats have special names for their unique colour combinations and patterns, ferrets have names for their colour combinations and patterns too. Before we can dive into colour names, we must first dismantle the ferret’s coat. It is important to note that ferret coats have two layers. The outermost layer is called full of coarse, thick, longer hairs that are meant to help repel water. These hairs are called guard hairs. The second layer is a shorter, fuzzier layer meant to help keep the ferret warm. This layer is called the undercoat. The guard hairs are often different colours than the undercoat and knowing the difference between the two layers is essential for being able to colour code your fuzzy. Without further ado - the colour designations: 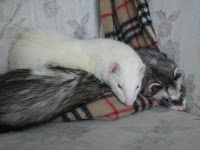 Albino: Albino ferrets have a white or off-white undercoat with matching white or off-white guard hairs and pinkish or red eyes. For showing purposes (yes, there are ferret shows), a pure white ferret with ruby red eyes is preferred. Roan: Formerly known as silver, these ferrets have a mixture of white and black guard hairs making them appear silver in colour. The ideally, the mixture should be between 50 and 60% black and 40-50% white, with the amount of black guard hairs determining how dark the nose and mask should be. Like DEW ferrets, Roan ferrets hard dark burgundy eyes. 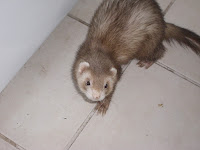 Chocolate: Chocolate ferrets have light brown or chocolate coloured guard hairs, and a gold or white undercoat. Their noses are pink or brick coloured and may have a brown T outline. (Chocolate on right)

Sable: Probably the most common colour of ferret, these fuzzies have dark brown guard hairs, a white or cream coloured undercoat, a dark brown or brown spotted nose and dark brown eyes.

Black Sable: The eyes and undercoat of the black sable ferret is the same colour as a sable, but black sables have guard hairs that are so thick and dark that the undercoat barely shows through. Their noses are black or specked with black.

Black: Black ferrets are not very common. Their guard hairs are black (not simply dark brown) and their undercoat is white or light gold. The eyes are black or near black and the nose is black or black speckled.
Posted by ferrets in the north at 10:02 PM