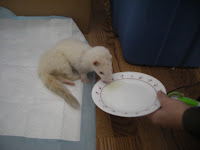 Was rescued by a good Samaritan about 2 days ago and surrendered to us.

Here is her story:

Approximately 10 days before she entered into her care, Silver ingested some poison. After ingesting the poison, the rescuer was told that she had a seizure, and then proceeded to lose control of her hind end and poop blood. Silver apparently did not pee for nearly a week and when she finally did manage to pee, it was a bright green colour. Her owners did not seek vet care for her at all during this time. Silver entered our care Wednesday evening and was assessed by our volunteers. She was underweight, appeared to be blind, had difficulty with her hind end and did not seem to be able to control her pooping and peeing very well. Fortunately, the poop and pee were normal colours. Silver also had what appeared to be a small round burn on her right shoulder. Our volunteers also noted that she was extremely fearful of people, tense when handled and that her canine teeth appeared to have been clipped. Silver would not eat any form of kibble (including the poor quality kibble that the rescuer had been told that she was being fed), and was reluctant to try anything that was offered to her. 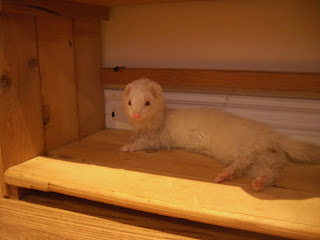 Silver (Kara) looks at the camera without seeing. Her eyes have hemorrhaged causing her vision to be obstructed by blood. She may eventually recover some or all of her vision, but only time will tell.

Silver was taken to the vet the morning after she entered our care. At the vet, we learned that she had most likely ingested rat poison and not ant poison as we had first believed. The reason for this belief was due to the nature of rat poison – it is a potent blood thinner and Silver was hemorrhaging into her eyes, causing her to lose her vision. The vet prescribed some Vitamin K to try to counteract some of the effects of the poison and has informed up that though he hopes that the poison is already out of her system (blood left in the eyes following a hemorrhage can be slow to clear up), it is most likely not out of her system yet as rat poison can take up to 21 days to be processed by the body. As for her poor mobility, it is too soon to tell whether that is caused by malnutrition or from the seizure (which may have been a brain hemorrhage) that she reportedly suffered following the ingestion of the poison. The burn, it seems, may be a cigarette burn, and appears to be several days old. Silver’s teeth are in decent shape considering, though they will likely need work in the future. There is also a possibility that Silver has and will hemorrhage internally. If she hemorrhages and begins to bleed out – a distinct possibility with rat poison – then she will require emergency vet care and will need to remain in the vet clinic for a few days. If she has already hemorrhaged internally, it may already be too late for her.

For the time being, Silver is living with a foster family, who has lovingly dubbed her Kara after Supergirl (she is a fighter), is working very hard on her rehabilitation. They are feeding her every 2-4 hours and giving her as much space and attention as she wants. They are working with her on trust, though this will take time, and are hoping, like the rest of us, that she will survive and have at the very least a few months of love in her life. 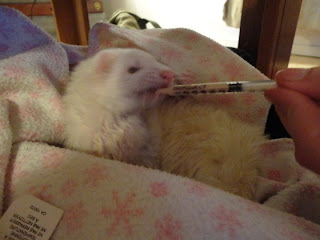 Silver (Kara)'s foster ferrents are feeding her every 2-4 hours and medicating her every 12. If she loses any more weight, the effects of the poison could be more severe.

If you would like to help Silver (Kara), you can do so by going to our website www.ferretsnorth.org and clicking on the “donate” button. All proceeds will go to covering vet bills of Kara and other ferrets entering our care that require vet attention, as well as helping Kara’s foster family with costs associated with Kara’s rehabilitation. Walmart and Save-On gift cards, as well as donations of puppy pads (Kara cannot use litters at this time as we need to watch for blood in her pee and poo), and soft bedding are also welcome. Kara also seems to quite like crinkle sacks and tunnels at this time.

Update: November 2011
Kara is doing quite well at this time. She has been left permanently blind (though one of her eyes can pick up light), with permanent neurological mobility issues, very little ability to control her bodily functions and has adrenal disease, however she now eats on her own, plays with her foster family, stashes food, begs for treats and has free range of their home. She loves giving them kisses and is quite a happy little girl; her disabilities don't seem to hold her back much at all. She stills loves outdoor adventures, cuddles and being fussed over. Here are some pictures of this little fighter today. 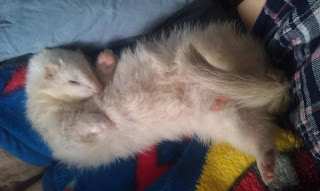 Kara asleep with her foster mum. 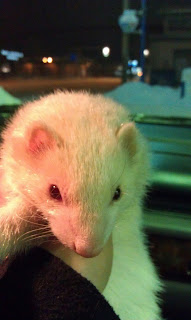 Kara on a nighttime adventure with her foster ferrents - notice how soft and shiny her coat is?

Kara passed away in her sleep in the early hours of March 18, 2013 - two full years since she came in to our care. Thank you to her foster family and all those that worked so hard on her recovery and rehabilitation.
Posted by ferrets in the north at 6:59 PM