Please give us a new home 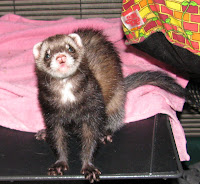 Allee, the cinnamon, is the older of the two, and her age has made her a huge cuddle bug. She loves climbing onto laps and curling up with her foster family. Abbee, the sable, is the more playful of the two. She is still quite cuddly compared to many other ferrets, but is more likely to want a game with her family than a cuddle. She is so full of life that anyone who visits the ferrets cannot help but laugh at her antics.

The two were from a home that could not keep them anymore and did not have time for them, so we would really love for them to go to a home that will spoil them rotten; after all, they deserve to be the 'apples of someone's eye' at least once in their lives.

If you are interested in giving Allee and Abbee the home that they deserve, please visit adopt.ferretsnorth.org and fill out an adoption application. If you have any questions about the pair, please e-mail us at info@ferretsnorth.org