Every so often, ferret lovers and future owners stumble across a ferret that has learned to fear people. Fearful ferrets may run and hide, fluff up, cringe, become stiff when handled and even bite their new owners. Fortunately, with some time, patience and positive reinforcement, fearful ferrets can be rehabilitated. 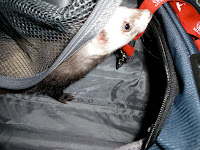 Before beginning to teach your new ferret that you are his friend and not his enemy, it is important to put yourself in his 'shoes'. Consider the fact that this ferret has been handled roughly and possibly even abused by creatures more than 100 times bigger then them, that these giant creatures were sources of pain, discomfort and suffering, and that the ferret has no reason to believe that you will be any different.

Here are some basic tips for helping you rehabilitate your fearful ferret:

1) Let him get settled in. Offer your new ferret some food, water and toys and leave him be for the rest of that day - chances are that he is freaked out enough by all the changes.

2)Be gentle, calm and quiet. Do not make loud noises or sudden movements while handling your ferret. Speak to him gently and in a friendly tone, similar to the one that you would use to soothe a baby.

3) If he will take treats, feed him treats when you pick him up, this way he learns that you = treats rather than pain. Most ferrets enjoy oil - Salmon Oil or Ferretone - as a treat. If the ferret has never tried oils before, placing a small squirt on a plate and leaving it out for the ferret to sample at his own pace would be recommended. If you are able, putting some ON the ferret (gently) to encourage him to clean it off should give him the opportunity to taste the oil. Oil is a particularly useful treat because it encourages LICKING instead of BITING which can come in handy later.

4) If he bites out of fear, be prepared for the bites to be hard and try to avoid them. Do not take the bites personally. Remember - he thinks that he is fighting for his life.

5) When on the receiving end of a bite, a pitiful "OW" will be more effective than a harsh "OW! NO!" Nose flicking or similar aggressive behaviours will reinforce the ferret's perception that humans are bad and should be avoided.

7) Let him out to play. He will be tough to get back into his cage, this is true, but ferrets need at least four hours of out time a day. Play time is something that many ferrets that come from abusive situations have never experienced before and this ability to run around without violent encounters may help the ferret realize that you will not harm him. It is also a good opportunity for him to see you play with (and not harm) your other ferrets or other pets in your household.

8) If your ferret is a fear biter, use the "no bite grip" while gently talking to him and petting him. Hold him in this manner for no more than a few minutes at a time when he is new and gradually increase the time as he begins to learn that you will not harm him. *If the ferret is injured or the no bite grip cannot be used, gloves can be used as a substitute. It is important to bear in mind, however, that gloves can make the prospect of being held even more frightening to a fearful ferret.

9) Hang out in the same area as the ferret (in a quiet part of the home) so that he has the chance to get used to your presence. These are not interaction opportunities (unless the ferret approaches you, you largely ignore him; you can chat with him a bit if you like, but do not reach for him). This allows the ferret to get used to your smell and presence in a non-threatening way, and at his own pace.

10) Gradually increase handling time using the no bite-hold. Doing so while offering treats or after a nice, big snack might be a good idea. If the ferret manages to grab your hand, do not release him immediately - you don't want him to associate BITE = FREE. Instead keep your cool and hold him for a count of five after the bite.

Rehabilitation does take a lot of time and patience and remember, not all of the above approaches work for every ferret - it is best to try a few different techniques and figure out what works for your new ferret. If you feel as though rehabilitating the fearful ferret is too much to handle, consider taking him to a local ferret specific shelter or rescue; ferret shelters and rescues often have more experienced owners capable of dealing with the issue. 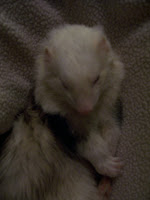 Posted by ferrets in the north at 6:05 PM