Ferret Pr(oops)ing --- A Near Tragic Tale 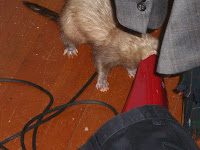 As mentioned in my previous blogs, the task of ferret proofing is NEVER done, and sometimes after months of showing no interest in a particular object or space, your ferret will take an interest in that object or space, when this happens, its best to act immediately to ensure that you ferrets safety, not doing so could have tragic results. As a friend of mine likes to say “ferrets are nothing more than suicide machines with fur, its a wonder we let ourselves get so attached to them”; nothing could be more accurate.

One of our ferrets recently ‘discovered’ a hole in the wall behind a fake cupboard door. Though he had seen this hole before, he had previously shown no interest in it... one day we noticed that he kept going back to that hole again and again. Not wanting to hammer boards into the wall of our rental home, we attempted to block off the cupboard with duct tape and cardboard. We later learned that this ferret had figured out how to remove duct tape.

One morning we went outside to eat breakfast in the sun. We were outside for less than 15 minutes and when we returned the cupboard was open - the ferret had gone into the hole. We squeaked his toy and heard him shuffling around in the hole, but he didn’t come out. Now, this ferret DOES come to a squeaky toy, but only if nothing more exciting is going on; we decided to continue on with our day and leave treats to tempt him out. When we returned that evening he had still not emerged. Something was wrong. We headed into the laundry room immediately below our suite to see if we could tell where he was. After about a half hour of searching, we found some fur popping out from around a large cast iron pipe. We removed some of the insulation and found his head - it was at this point that we realized that he was stuck. We borrowed some tools and attempted to cut an area large enough for him to exit; it was then that we discovered just HOW stuck he was. Somehow, this little guy had gotten his head pinned - he could breathe but he could not move. Unable to do anything more for him that night, we fed him some water and ferretvite and went to bed. We got up early the next morning and drove to the hardware store to rent some more appropriate tools. About an hour later, the ferret was still stuck and we came to the conclusion that if we wanted to get this little guy out we needed to get professional help, so we hired a carpenter. After four hours of drilling and cutting we exposed the ferret’s head and body; eventually we were able to free his head and, with the help of a vegetable oil drenching he was able to wiggle free. He emerged from his 27 hour imprisonment oily, hungry and dehydrated but other than few minor cuts and scratches on his body, he was unhurt. This ferret was extremely lucky. Not only did we know that he had gotten into our wall, we were also able to figure out where exactly he was stuck, enabling us to use the power tools necessary to saw through decades of poorly done renovations. He was also lucky because we were able to free his head, and it is doubtful that he realizes just how close he was to not being able to be taken out alive. 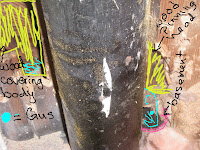 The outcome: the ferret has recovered and is as mischievous as ever, we now have some large holes in the drywall and a nice repair bill. The worst part is that this whole thing was avoidable. Had we simply asked about boarding over the hole in the first place and done so as soon as the ferret had shown an interest in the hole this terrible ordeal could have been avoided.

The bottom line: A fool may not learn from his own mistakes, but only a complete idiot doesn’t learn from the mistakes of others. Don’t let something avoidable like this happen to you - remember to act immediately when your ferret shows you something new that needs to be ferret proofed. We were lucky, you may not be. And YES, IT CAN HAPPEN TO YOU.
Posted by ferrets in the north at 7:32 PM